Black comedy, the twilight zone and a splattering of horror... 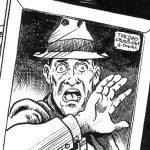 Genesis of the comic book

In 2013 I entered a competition run by the Stranger With My Face horror film festival, held in Hobart, Tasmania.  The objective was to write a horror film script of no more than ten pages, in ten days.

While writing the script, I concluded that, if ever produced, it would work best as an animated short.  This led me to think that it could also be adapted into a script for a comic book. The result was a 32-page story called Cut Down.

But as I am hopeless at drawing with pencil or pen, I then spent a further frustrating 18 months looking for someone to collaborate with me on turning the script into an illustrated comic book story.  Luckily, while wandering around the Homecooked Comics Fair (Northcote Town Hall, Melbourne, April 2015) I came across a self-published comic called Amazing Tales, written and drawn by Dave Dye, and was highly impressed by his great illustrating style - I thought it was just right for Cut Down.
You can see samples of Dave's art on his website.

Dave very kindly agreed to work with me to get this comic book illustrated.  You can see a small, cropped sample from the illustration he has made for the splash page.

Tap bar icon for menu, then navigate using the arrows